Not for Profit / Fundraising

James Michelson, Founder of JFM Concepts and VDP Web served as a judge at the Future Farmers of America 2012 Marketing Plan contest on Thursday, a part of the FFA Annual Convention held this week in Indianapolis, IN.  The National FFA Convention & Expo is the organization’s premier gathering during which all FFA competitive events and programs are recognized nationally. The event brings FFA members together to learn, be inspired and celebrate their accomplishments in the organization.  More than 55,000 people attend the show annually and it is Indianapolis’s largest convention. The National FFA Organization provides leadership, personal growth and career success training through agricultural education. Today, there are 557,318 FFA members in grades seven through 12 who belong to one of 7,498 local FFA chapters throughout the U.S., Puerto Rico and the Virgin Islands.

The marketing technology experts at JFM Concepts are proud to announce they have partnered with the Great Lakes Graphics Association, part of the Print Industries Association of America, to provide cross media marketing services.

JFM Concepts has used its industry leading VDP Web® cross media marketing platform to support the Great Lakes Graphics Association in membership development and retention efforts.  The campaign included a multi-channel distribution effort to current and former association members to conduct a highly complex and detailed survey.  The questions were designed to gather detailed feedback from the membership in order to improve services to boost both relevancy and values in a rapidly changing marketplace. 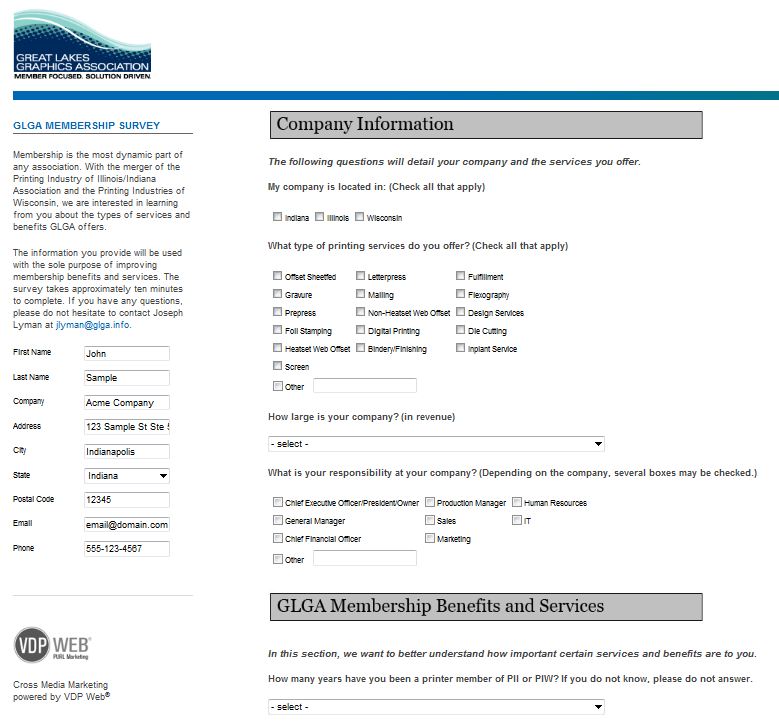 Since 1886, the Great Lakes Graphics Association has represented the printing industry and its allied partners.  The GLGA is a professional trade association representing members in Indiana, Illinois and Wisconsin that helps businesses achieve powerful results.  JFM Concepts and VDP Web are proud to assist the Association in developing industry leading cross media marketing tools and systems to accomplish their mission.

Special thanks to Steve Anzalone, COO of the Harding Poorman Group for his efforts in this project.

VDP Web is proud to announce that founder and principal James Michelson, the author of “Cross Media Marketing 101: The concise guide to surviving in the C-Suite” has been featured in several articles both in print and online by Print Professional Magazine in the their most recent issue.  In articles about landing pages, PURLs, email, SMS-Text and other channels, the experts at Print Professional interviewed James on a variety of topics from education, not for profits, fundraising, and general business marketing.

JFM Concepts and VDP Web® are proud to announce the publication of their latest case study on direct marketing for Education. Successful cross media tactics for admissions, events, alumni relations, planned giving, donations and more are covered. Campaign goals were to decrease cost, improve response rates, document and measure return on investment, and simplify the follow up process. Download the case study for free at http://education.vdpconcepts.com.

The VDP Web® cross media marketing platform has been deployed by public and private educational institutions of every size to deliver outstanding results. Successful projects have been launched by organizations as diverse in size and mission such as The University of Michigan and Northeast State Technical Community College to regional Christian institutions such as Calvin College and Grace Bible College. Not-For-Profit institutions such as Harrison College and various secondary schools have also used the system for admissions, alumni relations, fund raising and planned giving. Integrated campaigns have been cost effectively run for multiple departments without the need for internal technical assistance or support. University of Michigan Landing Page, one of many samples in the case study.

There are common challenges faced by the academic institutions detailed in this case study. The goals of all the campaigns that follow were to decrease budget, lower man hours required for follow up and fulfillment, increase response rate and add personalization to generate leads. Each of these projects was executed by one decision maker and did not require the support of other departments. The cases examined assume that additional budget expenditures for new projects is unlikely, IT and other internal technical support is not available, and that the department does not have additional manpower resources to dedicate to a new project. If any of these assumptions are not true, so much the better.

It is possible to implement a basic cross media marketing strategy without any major changes to the current marketing mix. Unique landing pages, QR Codes, new 800 numbers, and SMS Text can be added to any existing marketing channel to add new data collection mechanisms and start a two way conversation with prospects, students, alumni and donors.

Last month, Target Analytics released their "2011 donorCentrics™ Internet and Multichannel Giving Benchmarking Report" to the public.  The complete report can be found on their website here.

• For the large direct marketing organizations participating in our online benchmarking groups, the majority of gifts are still received through direct mail.

• Although direct mail remains the dominant channel for new donor acquisitions as well, it has become increasingly common for new donors to give their first gift online.

• However, long-term value varies depending on the donor’s origin gift level. The substantially larger gift amounts given by onlineacquired donors can mask issues with retention.

• Multichannel giving is not ubiquitous. The majority of multichannel donors are those who are acquired online and then subsequently start giving direct mail gifts. This is the only situation in which there are significant numbers of cross-channel donors across all organizations.

• Every year, large proportions of online-acquired donors switch from online giving to offline sources — primarily to direct mail. The reverse is not true, however; only a tiny percentage of mail-acquired donors give online in later years.

• Robust direct mail programs drive up the retention and long-term value of new donors acquired online. Without the ability to become multichannel givers by renewing their support via direct mail, this group of donors would be worth far less. Other than monthly recurring giving programs, established direct mail programs are the best method for gaining repeat gifts from onlineacquired donors.

• When online-acquired donors move offline in subsequent years of giving, it does have some negative effect on their value in the renewal year. The higher the donor’s original gift level, the less they upgrade and, in fact, the more likely it is that the donor will actually downgrade if they move offline. However, these lower gift amounts are far outweighed by the higher retention of onlineacquired donors provided by the direct mail channel.

• For the consistent givers who comprise the majority of donors already on file, the presence of past multichannel giving is generally not a significant factor in predicting future retention or long-term value. Traditional RFM factors are far more predictive.

Posted at 08:10 AM in Cross Media Marketing, Direct Marketing, Education, Not for Profit / Fundraising | Permalink | Comments (3)